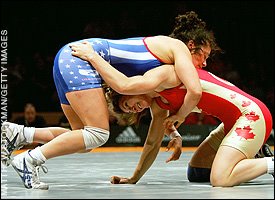 Thalia’s squeals and wild arm flailing meant that either she was suddenly very excited about the margarine- shellacked scrambled eggs from the hotel’s breakfast buffet, or more likely, her baby radar had kicked in.

Sure enough, a mom about my age had entered the dining room with a little girl who looked about Thalia’s age. After the standard I pushed a kid out of my vagina-you pushed a kid out of your vagina, so hi there nod across the tables, I brought Thalia over to say hi.

“11 months,” her mother beamed as she tossed back her red curls.

“Well actually she’s 11 and a half,” she corrected. “Her birthday is in two weeks.”

“And look at those cheeks!” I commented. The little girl indeed had huge, squeezable pillows of chub on either side of her nose.

“Oh,” the mom said a little defensively. “I’ve been worried about them.”

“Oh yes. But the doctor assured me they’ll go away.”

The doctor assured her? Seriously? She asked her doctor about her kid’s cheeks?

“Is she in any playgroups?” the mom asked.

“No,” I said shifting Thalia to my other hip while she reached for her new friend’s pacifier. “No playgroups yet.”

The light bulb went on over my slightly dense new mommy head. I was getting this little girl’s resume disguised as chitchat. I had heard of these types of mothers but had never actually encountered one in person. (Probably because I did not have a playgroup.) I was so excited. A real live, CompetiMommy. Right here! Talking to me! If only I had had my camera on me.

The questions continued to fly: Do I take classes with my daughter? Does she know sign language? Does she take swimming? Is she good on the plane? How many words does she have? It was exhausting.

My dreams of lolling aside the pool together with my new pal, ordering daiquiris while our children frolicked unattended by the deep end were dashed to tiny little bits. As amusing as it is to watch a total stranger attempt to impress me with her infant’s inventory of friends and words and signs, I just don’t have the energy for it. There’s too much angst in the world as it is, what with Iraq and Guantanamo and the move of Arrested Development to cable.

But the interesting part of it all is that while this woman was painting a picture of a prodigy who would graduate Harvard at thirteen with a dual major in music composition and quantum physics, the kid was absolutely unremarkable. She wasn’t particularly responsive or vocal or physical or…anything, really. The most striking thing about her were those delicious cheeks.

The cheeks her mom hoped would go away.

If you’d like to read the awesome comments on this post, please visit the  post on my old blog. One day I’ll figure out how to get the comments to import. Sigh.

{Comments Off on The CompetiMommy}