My superhero weakness is empathy.

When I was little I saw it as my sworn duty to befriend every new kid, every chubby kid, every weirdo booger-eating kid in my class. It’s always been second nature to put myself in other people’s shoes.

I credit good parenting for this. Also, Davey and Goliath.

Now as an adult I still feel compelled to make people–friends, strangers, the Bangladeshi cab driver–feel good. Let me be clear: I’m no Pollyanna. I can be as cynical and self-loathing as any writer on my side of the Brooklyn Bridge. I agree that The Bachelor is at its best when some blonde chippie runs off the set crying. And I’m certainly not above a good Paris Hilton jab because frankly, she’s worked very very hard to earn it. To not make fun of Paris Hilton probably hurts her feelings and now you know how I feel about that.

And if you come after my family, I’ll cut you, bitch. I totally will. I have a baby nail clipper in my diaper bag and I’m not afraid to use it.

the inner douchebag to a degree that gives PMS a run for its money. I could surely gravitate to the dark side, join the troll patrol. Snark comes easy to me. But when it comes down to it, I’ve got a kid. A really good one. And I don’t plan on messing her up just yet. Which means I don’t want her coming across something I’ve written and thinking, Mommy is mean.

Or worse: Mommy is mean. Yay!

So in honor of Thalia, I’m spreading some love from my insignificant little subdomain. I call it Say Something Nice Day at Mom 101.

In the future, maybe we’ll have an entire Say Something Nice Month with its own website and a big section in the Hallmark store and a few treacly public service announcements. (Hey, maybe we can get Lorraine Bracco!) But for now I’ll start with a day. A day devoted to saying nice things about ordinarily disparaged topics–all with as little irony as I can muster.

I’m just that kind of girl.

Richard Simmons
I sat across the aisle from him on a plane ride from LA to New York. While I admit that he was so, um, energetic that the cabin (quietly) applauded when he fell asleep, he couldn’t have been nicer to the flight attendants. They each took turns sitting beside him and, hands pressed into his, confessed their every dietary woe. He listened attentively and with genuine compassion. 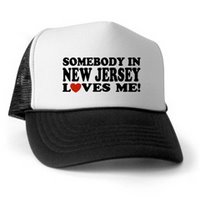 He also offered each of them free advice, like “don’t eat the bread.”

New Jersey
If there were no New Jersey there would be no Judy Blume. And if there were no Judy Blume, I would never have been the most popular girl in fourth grade for one week, thanks to my copy of Forever which I shared with my entire class in the hallway ouside the school library. (Especially page 64, heh-heh.)

Cher
I’m all for gay marriage, and as such, I’m all for the music they play at their weddings. 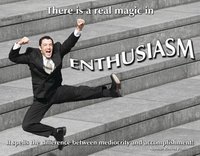 Those Motivational Posters
I guarantee you that those inspirational posters you find around the office have helped more than a few people out of some tough spots in life. I myself have looked at that You Don’t Fail Until You Quit poster many a time and thought, you know, they’ve got a point there. Know why? Because you don’t fail until you quit! It’s true!

Mullets
You’ve got to step back a minute and appreciate the loyalty that some people devote to a hairstyle that’s been out of style going on twenty years.

These are strong, confident people, people at peace with who they are. Couldn’t we all take a lesson here?

Bridesmaids Dresses
At least you don’t care when you spill your drink on one.

Jared From Subway
Let’s give the guy some credit, he lost 250 pounds without

The Advertising Team Who Writes the Ads with Jared From Subway
Take my word for it, they’re not happy about it either. I’m sure the client is all, “Guys, you have to use Jared. He’s testing really well in focus groups.” And the team is all, “Fine, but I’m not putting it on my reel.” Then they watch Nike ads and weep openly.

Fudgie the Whale
When I was a kid, Carvel ran commercials that said, “This Father’s Day, get your dad a Fudgie the Whale!” Year after year, my dad would joke, “Where’s my Fudgie the Whale?” After I turned 16, my best friend and I talked a gullible Carvel manager into hiring us as cake decorators. When I wasn’t snarfing down the chocolate crunchies directly from the tub, I made my dad

Blogging
I’m stumped. I can think of nothing good to say because all bloggers are narcissistic navel-gazers who write about the most boring crap imaginable that no one, including their own mothers, would ever want to read in a million years. In fact I don’t even believe that you’re here right now.

{Comments Off on If you can’t say anything nice, I’ll do it for you for ten dollars and a foot massage}