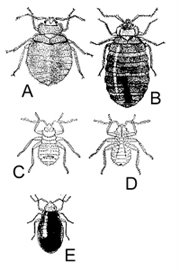 When you wake up at 2 AM with an idea, it becomes somehow magnified and distorted like a face reflected in a funhouse mirror.

If are roused from sleep anxious about a business meeting, it’s as if that meeting alone will make or break your entire career. If you are thinking about SIDS, you’re all but convinced that your baby is turning blue while you lie there and talk yourself out of checking on him. And if your eyes fly open with an idea for blog post? You will determine that it’s so brilliant, the Nobel Prize committee will convene for a special session in Stockholm just to create a new category in your honor.

It also goes without saying that any minor medical complaint you may have in the wee hours of the night takes on a life of its own. Thus, I forgive Nate for springing awake at 12:45 with a rash and shouting, “We have bedbugs!”

I forgive you for jumping to this conclusion even after I assured you that it was an allergic reaction of some sort and you should just take a Benadryl and get back to bed.

I forgive you for racing to the computer anyway to look up bedbugs on the internet, being that I have the same unhealthy relationship with WebMD.

I forgive you for searching out whatever information would confirm your bedbug theory despite all evidence to the contrary. (This, to me, is one of the most fascinating aspects of the internet: whatever you think is true, be it bedbugs or Roswell or the notion that Kurt Kobain is alive and well and living as Elvis Presley’s houseboy, you can always find a source to back it up.)

I forgive you for somehow believing that bedbugs could live only on your side of the bed, bound by some sort of bedbug code of honor that prohibits them from sucking the blood of new moms and their progeny.

I forgive you for snatching the baby from the bed, depositing her on the changing table, and unsnapping her pajamas, determined to prove that it was indeed bedbug (or maybe flea) bites making her cry and not the fact that she has a cold. Or that she’s teething. Or that it was two in the freaking morning.

I forgive you for muttering obscenities under your breath about me and bedbugs and fleas and me while you headed back to bed.

Because I know that this is what Midnight Brain does to you. And because frankly, I’m just too tired to fight about it today.

{Comments Off on Midnight Brain}