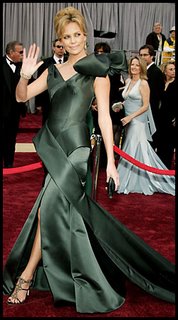 Best sound editing? Feh. I can think of plenty of other awards people will happily stay up all night for:

Biggest bicep that could have been mistaken for a goiter: The producer accepting the best picture award.

Biggest upset: Jamie Foxx sticking with the script instead of doing the “heyyyy…hoooo” thing.

First ever interpretive dance to give interpretive dance a bad name: Crash. It was the most horrifying spectacle I’ve witnessed since being dragged to Titanic: The Musical which in my opinion, is just a baby step away from PanAm Flight 103: The Musical. And it didn’t help the segment much that Rousseau from Lost was singing.

Best line of the night: Dame Judi Dench took my eye out in a bar fight. This is why Jon Stewart and his writing staff should do the Oscars every year. All of it, too. Not just Bruce Villanch’s cast-offs.

Best example of life imitating art if you call Something’s Gotta Give, art: Jack Nicholson bringing his teenage daughter – whom I actually believed could have been his date.

The Duh, Why Didn’t I Think of That Award: To the creator of the All Cowboy Films are Gay segment.

The winner most likely to make Louis B. Mayer roll over in his grave, roll back again, roll over one more time, then stand up and do the running man: Best song, It’s Hard Out Here for a Pimp. 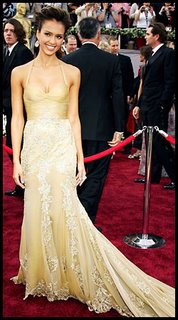 Best audition for a spot at Madame Tussaud’s: Dolly Parton.

Best evidence that if you have a good plastic surgeon, you don’t need to know math: The twinkie on the E! preshow saying, “you know Ryan, the top publicists make as much as THREE THOUSAND DOLLARS A MONTH working for these celebrities!”

Most likely to inspire thousands of teenage girls to stick their fingers down their throats after fourth-period lunch today: Jessica Alba wearing a size negative 42.

Best inside joke that went over the heads of the 41 million non-industry people watching the show: Lily Tomlin and Meryl Streep’s Altman-esque introduction to the Altman tribute. I liked it. But I’m pretentious that way.

Best post on an online message board last night that made me feel old: What has Meryl Streep been in, anyway? 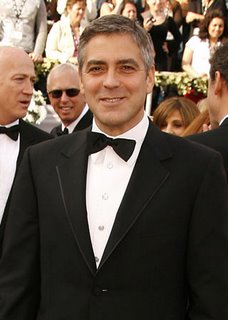 Best reason for me to burn all of my pregnancy photos: Rachel Weisz, that bitch.