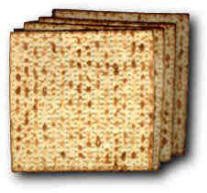 Tonight is the first night of Passover. I don’t sense I have a whole heck of a lot of Jewish readers (except you, Aunt Fredda! Hi! And hey, you too Hally!) in which case I’ll elaborate a bit so that you don’t log off in search of some knock-knock jokes or something a little more accessible.

For many families, Passover means an extensive Seder dinner where the family goes around the table reading aloud from the long, drawn-out story of the exodus of the Jews from Egypt before getting to eat. My blood sugar is plummeting just thinking about it. Imagine going through this whole two-hour production, where food is RIGHT IN FRONT OF YOU, but all you can eat of it is like a teaspoon of horseradish and a some parsley dipped in salt water, and a few pathetic crumbs of matzo. You do get to drain some wine in the process, but sadly it tastes like grape juice spiked with a dozen packets of Sweet n Low. And then, when you finally do get to pass some actual food around the table with whatever strength your weak, shaky arms can still muster, it doesn’t look like anything you really want to put in your mouth.

We Semites may rule in some departments, but I concede cooking superiority to at least seventy-two other cultures. And that includes nomadic peoples with no access to fresh ingredients, cooking implements or fire.

Passover at my mother’s house, however is one of my favorite holidays. We’re not very…how do you say it…traditional. We’re the family who skips right to the good parts of the Haggadah, which means reciting the four questions, drinking three glasses of non-Manischewitz wine, and singing Dayenu in a key definitely not intended by the songwriter. We put an orange on the seder plate, a new tradition inspired by an Orthodox rabbi who said something to the extent of, “we need women rabbis like we need an orange on the seder plate.” Plus we open the door for Elijah on the outside chance that a prophet decides to show up at our doorstep. (Hey guys, I’m famished. It’s been a long couple of millieniums getting here. Got any gefilte fish left?)

From year to year, the conversation, at least with my mother at the table, is guaranteed to hit most if not all of the following topics:

-how the term The Chosen People is divisive and offensive to other cultures
-how history may be correcting the entire story of the exodus of the Jews
-how the patriarchy is responsible for the demeaning roles of women in the bible
-how the bible is just one guy’s mythology anyway
-how George Bush is ruining the country
-how Karl Rove is gay
-how my mom and I attended a massive feminist reconstructionist hippie seder one year, and how it led us to conclude that an entire room full of Jews with no rhythm should never be allowed free access to tambourines
-how good the matzoh ball soup is

It is not a forgettable evening, I promise you this much.

But as the years have gone on, with cousins spread farther around the country, and more and more gentiles entering the fold, the Passover tradition has evolved. What we now have is Peaster, a Passover-Easter hybrid combining the best aspects of each. Expect further details about the Peaster egg-dying death match this weekend.

I was convinced we had the lock on make-your-own-Passover-tradition weirdness until yesterday when my mother forwarded me this.

{Comments Off on Dayenu}