Thalia’s first birthday party was absolutely [adjective]. Despite the fact that adjective Nate forgot to [verb] any of the [plural noun] to serve our guests until midnight the night before which made me totally [verb] out.

Relatives came as far as [place] and [place] and we were honored that they made the [adjective] journey. Especially [female name]. As for [male name], eh. We just invited him because he gives [adjective] gifts. Although the best gift definitely came from [name], hands down. I mean, wouldn’t you want a [adjective] [noun] if you were one year old?

If I’ve learned one thing from the celebration, it’s that no child’s birthday [noun] should be without copious amounts of [color] and [color] sangria. It certainly makes the guests more [adjective]! It also explains why our childless friends were having a [adjective] time, and not leaving [adverb] right after eating the cake.

Oh, the cake. The [adjective], [adjective] cake. My [adjective] father undertook the task as if it were a dying [noun]’s last request. [Number] recipes and [number] trips to the special baking store downtown resulted in an extremely [adjective] homemade birthday cake with [adjective] chocolate frosting that Thalia [verb+ed] enough to provide us with the requisite First Cake on The Face Photos. In fact, we were delighted Thalia had room for it, after having eaten the tips off of nearly [number] birthday hats beforehand.

Which brings me to one more thing I learned from the [adjective] celebration: [verb+ing] a baby full of [number] pounds of sugar moments before her naptime isn’t always a [adjective] idea.

So do me a favor? [Adjective] please?

Remind me next year. 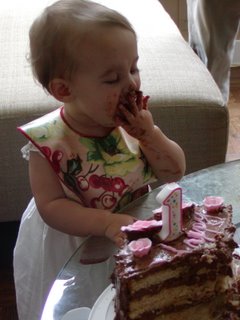 Yeah, but we got the photo! Isn’t that what counts?

{Comments Off on Interactive Birthday Recap. Fun For The Kids!}