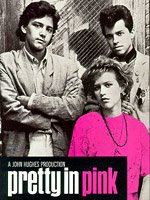 Nate rarely texts me about celebrity sightings at his trendy restaurant job since it’s pretty much a daily occurrence. Bono, Madonna, Jack Nicholson…no biggie. He did get excited about Joe Millionaire back during the show’s heydey. And of course Monica Lewinsky. Otherwise, eh. He’s jaded.

It’s me that’s the celebrity stalker of the family. (Though New Yorker that I am, I deny it to anyone but you.)

But last night was different for Nate.

Knowing what a former Brat Pack groupie I was and how excited I was when I used to run into him in the West Village, Nate raced to text me but found his batteries dead. So he did the next best thing: He told his fellow coworkers.

And straight from the Oh My God We’re So Fucking Old Files, not one of them knew who he was.

It’s a travesty, I tell you. It is a sad, sad, state of affairs when the response to, “Come on! St. Elmo’s Fire!” Is “Oh right…I think I saw that once at camp.”

Maybe you don’t watch Lipstick Jungle. Maybe you don’t know that Andrew McCarthy is doing theater up the whazoo and has recently written his own monologue on parenting for the Vagina Monologues-esque play Afterbirth. (Which, as luck would have it, is at the Triad next week as I’m heading to San Francisco for BlogHer. Grr) But still, St Elmo’s Fire? “Maybe?”

Not an acceptable response.

And so, for any Gen Y or Gen Z or whatever the heck we’re calling you pop culturally-illiterate slacker twenty-somethings these days, I present to you the 1980’s career highlights of my former love of my life, Andrew McCarthy.

“Oh shoot. Can we do it in an elevator first though, before he finds out?”

“I know! You like totally don’t know if you’re ready to grow up, you want to date your friend’s girlfriend, and Georgetown is expensive. But hey, at least we have each other.”

“And Demi Moore has her crimping iron.”

“But you can’t date the cute rich kid! You are poor and motherless and quirky and have red hair and your best friend is Annie Potts and your dad is Harry Dean Stanton. Also James Spader is up to his nefarious ways.”

“Yes I can, dammit. And I will do it against a Psychedelic Furs soundtrack. Then I’ll make a prom dress. I wonder what color. Hmm. I’ll surprise you at the end of the movie with it, how about that?”

1987: Mannequin
“Holy cow, that store mannequin looks exactly like Samantha from Sex and the City! You gonna date her?”

“But you are all so cool that you make me want to do drugs.”

1988: Fresh Horses
“Wait, is that Molly Ringwald and Andrew McCarthy together again? And Ben Stiller? And Viggo Mortensen?”

“Actually, no. No, that wouldn’t be that funny at all.”

Andrew, if you’re googling your name and come across this post? Fist to the heart–you’re the best. I still love you a little. Want to get the kids together for a playdate sometime?

62 thoughts on “Mom101 schools you on the best movies of the 80s, all of them starring Andrew McCarthy”