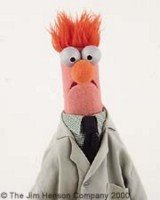 2. I have been in three commercials: At 16 I was cast in an ad for Orajel Brace-Aid where I smiled for the camera and revealed a full set of railroad tracks on the pearly off-whites. They made me wear an ugly blue crew-neck sweater and (gasp) a collar, and I was mortified by the wardrobe. But it was fun to be at house parties (just called “parties” back then) when I came on TV. In my second advertising job, I was filmed shooting flaming arrows at a Chinet paper plate after our model called in sick, but only from the chin down. A few years ago, Frankenstein painted my toenails in a close-up for a Universal Orlando Resort ad, when our talent turned out to have long, gnarly, creepy feet.
(Notice a pattern here, by the way? The older I get, the less of me they show. In a couple years I’ll be like, “hey, you can see a microscopic closeup of my clogged pore in this Bioré spot!”)

3. I speak a little Bosnia. And that’s pretty much what I can say: I speak a little Bosnian, in Bosnian. Also, a really bad insult that pretty much translates to Go back to your mother’s [p-word euphemism deleted]. By the way, I have no problems with the P word. I just don’t need any more freak-show headcases stumbling onto my site via MSN searches for “pictures of my mother’s [euphemism deleted].”

5. As further evidence of my mastery of the laws of nerddom, I try to commit all the MTA’s Poetry in Motion posters to memory when I ride the subway.

6. As Judd Nelson said in the Breakfast Club, “everyone can do something.” What I can do is a spot-on impression of Beaker from the muppets.

*The answer: They are all things you didn’t know about me. Six to be precise. Now see what I did here? I titled this “See if You Can Tell What These Things Have In Common.” Because if I had called it “The Six Weird/Interesting Things You Don’t Know About Me Meme that Wendy Tagged Me For,” you wouldn’t have read it, would you. Admit it, you hate memes. Hate them with all your heart. You just come here for the free booze and loose women. By the way, I would never tag anyone for a meme, but if I were to, I would tag Melanie, Catherine, Sam, Sweatpants Mom, Stephanie, Kevin, and Binky, the ever wonderful, should be required reading Binky…just so you know.)