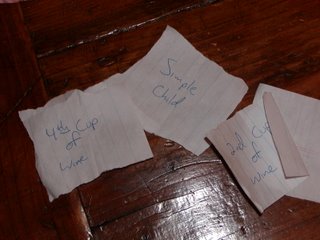 As with Festivus, my family’s Passover-Easter hybrid celebration has its own specific traditions which I touched on a few days ago. There is no Airing of the Grievances because face it, we’re Jews. We do that all year long. But there is the arguing over the name Peaster.

The names Eastover and Eggover are up for consideration to replace Peaster. While this debate comes up every year, the addition of children to the mix seemed to have increased the urgency of settling the matter. I do understand the argument that the word Peaster really only borrows the P- from Passover and the whole Easter from Easter, and that truthfully, our weekend is a lot more of the former than the latter. But I just can’t come around to the name Eastover. To me, Eastover is where you summer. Like, Oh Staci, I’m so glad you’ll be at the beach house in Southhampton again this year! I’ll be right next door in Eastover. Eggover is another option, but I feel it’s better suited to a low-cholesterol egg substitute than a holiday. I firmly remain in the Peaster camp if only because let’s face it, it sounds funnier. I may even be alone here, but I’m fighting the good fight.

Apologies to my brother and sister-in-law who thought they could reign in the cacophony this year with their lovingly abridged Hagaddah, and a well-considered system to organize the readings by drawing names out of a hat–but no dice. Seders with my family are loud, they’re funny, they’re rude, and we’re okay with it.

We talked over each other. We yelled over each other. We spilled red wine on the white chair. We bartered our readings. (No fair, you got the Wise Child? I wanted the Wise Child! I’ll trade you the Breaking of the Matzoh AND the Seder Plate for your Wise Child.) We made up our own Hebrew words to the song Dayenu, and we made up our own tune to the song Let My People Go. I think my cousin Adam described it as twelve singers and thirteen melodies. And of course, after leaving the door ajar for the prophet Elijah, whenever the wind blew open the door we all screamed, ELIJAH! Oh, that never gets old. It’s like the rule of thirty-sixes that I learned in improv class: If something isn’t funny once, say it again. And again. And again. By the thirty-sixth time it’s hysterical. But I’m sure those of you with toddlers disagree.

We did however add one new tradition this year that I hadn’t expected: Anytime something funny happens, turn to Liz and say, “Are you blogging this Liz? You’re blogging this, aren’t you? Take a picture of this, Liz! This would be great on your blog.” 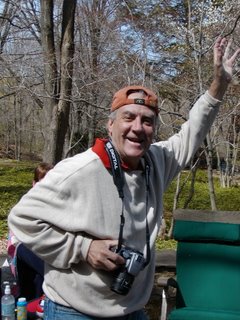 The Easter-inspired aspect of Peaster is quite simple. You eat breakfast, and then proceed directly to the backyard for the annual Peaster Egg-dying death match.

On one side there’s my stepfather, Christopher, the ultimate egg-dying purist. He believes that eggs should only be colored in single, vibrant hues. No pastels, no gimmicks. Chris will use his own dye recipe created from endangered animal parts and toxic chemicals if it will generate the desired color result. This is serious stuff; he has a physical aversion to anything less than perfect, let alone touching his own meticulous craftsmanship. 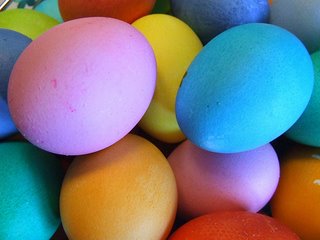 On the other side, there’s Team Everyone Else. It’s our goal to make Christopher as crazy as possible with creative, irreverent, or flat-out aesthetically displeasing designs. The more colors we use, the more wax, the more stickers, the better.

Now keep in mind that not one person in my family is under thirty years old. This is all the work of otherwise successful, intelligent, reasonable adults. In fact the day the next generation is old enough to participate, is the day we’ll distract them with jellybeans in the front yard while the egg dying slaughterfest continues secretly in the back.

Yesterday, our team generated more impressive results than usual. There was the chicken pox egg, the patchwork egg, the 3-D gemstone egg, the stoned smiley face egg, the ohmigod I can’t stop putting stickers all over this egg egg, and the New York gubernatorial candidate Elliot Spitzer egg.

But the one I believe put Chris over the edge, the one that caused him to snatch one of our eggs and eat it whole–shell, dye and all–in a fit of temporary insanity…was Nate’s bloody eyeball egg. 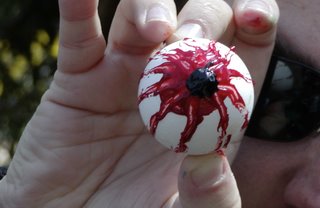 Victory is ours. And it is sulfuric.