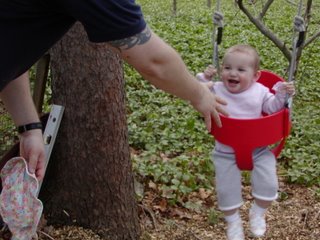 Please don’t call Nate The Mommy, or any derivation thereof. Not Mommy Nate, not Mr. Mom that old chestnut, not The guy who’s playing Mommy.

And certainly not The Nanny.

He stays home with our daughter. This makes him a Stay at Home Dad.

Last night at dinner, I asked whether I could let baby taste the guacamole and Nate rolled his eyes (“too spicy!”). Eyerolling is his preferred method of communication–he’s got a different eyeroll to suit any occassion, each with its own shade of meaning–so I didn’t think anything of it. What did cross my mind was whether the waitress, overhearing the exchange, assumed I was someone other than Thalia’s mom. Enter: Guilt.

Somehow I doubt that the guilt factors into the equation of working dads quite the same way as it does with working moms. When I ask Nate if it’s okay to give the baby guacamole, whether she napped well today, or what it means when she clenches her fists like that–it’s hard. Really really hard. Because deep down I think that I should already know these things. Something tells me that working dads don’t feel like they should know all of the minor details of their child’s lives. I think some of them want to know these things. I think many of them enjoy knowing these things. But I don’t think the vast majority feel the obligation in quite the same way.

In fact I think that the stay-at-home dad who is capable of some level of introspection likely feels he should be doing something else. Which isn’t to say that he doesn’t love and take care of his child like nobody’s business–anyone who’s spent even a minute with Nate and Thalia together will gush about what a fantastic (not mom) dad he is. But prescribed societal roles are tricky to overcome, even for those of us who protest against them the loudest. They’re ingrained in us to the degree that they start to feel more like biological imperative than imposed cultural norms. Or maybe they’re a little of both.

It may not be PC to say so, but I’ve come to the conclusion that a stay-at-home dad is not the male equivalent of a stay-at-home mom. On the outside, the job may be performed just as well, but on the inside there’s so much other stuff that comes into play. I think stay-at-home dads have to fight so many internal and external forces to perform their jobs, let alone perform them well, that they deserve a whole lot more credit and encouragement than even their female counterparts.

Thank you, The Management.

*Edited to add: One day I’ll figure out how to transfer comments from my old blog over here. Until then, find some pretty genius ones here on the original post.