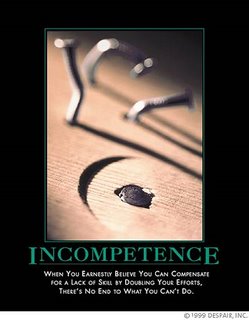 I was lying in bed, brushing the dander off the satanic cat when Nate called my name through the pocket doors from the adjacent baby’s room. “Liz,” he admonished, “do you have to leave the top open on the wipes? It dries them out.”

I mumbled a half-hearted apology.

“This is like the third time you’ve done it though,” he said as I heard the crinkle of a fresh diaper in his hands. “C’mon already.”

Before he could continue, I bolted upright.

It was like the third act of some big-budget, predictable romantic comedy. I’d like to think I’d be played by Jessica Alba, but I think I’ll have to settle for Sara Jessica Parker under bad lighting.

The incident got me thinking, it possible that men aren’t the clueless creatures that they proport to be? That they are indeed capable of remembering to check the diaper bag for diapers before leaving the house, to insert the little round disc in the bottle to keep it from leaking, to give the baby a bath and use soap–without being told? Is it possible that men do not in fact have a genetic affliction that keeps them from throwing the baby’s clothes in the hamper and not on the floor beside it? Is it possible that they are actually able to care about things like appropriately moist diaper wipes, even if the diaper wipes are not blonde and braless and able to toss them a Bud while humming Hail to the Redskins?

Is there even a slight chance that as far as domestic cluelessness men are…faking it?

I hate to speak in generalizations because indeed there are men–some of them reading this very blog–who are capable and conscientious and fastidious, and very much in possession of the nurturing gene. But if I may generalize anyway (why thank you very much, I think I will generalize!) I am pretty sure that most men do not fit this description. They do not remember to pick up formula at the store, let alone checking the list to see if you need formula before going to the store, let alone even knowing that there’s a list to look at, let alone going to the store in the first place.

They do not do these things because they have lead us to believe that they handle the parenting minutia poorly. Or worse, that they are incapable of handling it at all. And so, moms are left multitasking again, remarkably able to both clean up our partners’ messes and shake our heads at the incompetence. Sometimes we even chew gum too!

They’re the Daddy Duhs: Those little annoyances that we laugh about and roll our eyes about, and then go and fix so that we can be sure that things are done the right way So There.

The Daddy Duhs are rarely huge, horrible things like dropping the baby on her head or letting her play in the oven. They’re the little annoyances–the hangnails of parenting. Like sticking the baby food jar that’s been open for six days back in the fridge. Or putting the baby in a snow hat in 95-degree heat, because the summer one is “too pink.”

I always assumed the Daddy Duhs could be justified by a combination of several factors: Career chaos occupying that grey matter that might be applied towards keeping the household in order; lack of time; lack of interest; basic genetics and evolutionary tendencies. But now I’m changing my tune: I think that men do as little as we allow them to do. Less rising to their own levels of incompetence than sinking to our own low expectations.

Ladies, are we being had here?

On the other hand, I’m guilty of some mild deception myself. I spent many years pre-Nate as the single girl who changed her own lightbulbs, installed her own venetian blinds, killed her own mice. (Or at least called her own super.) I could carry my own luggage. I could hail my own cab. I owned tools for God’s sake. Today, you’d be hard-pressed to catch me tippy-toed atop three phonebooks on a wobbly ladder, 75-watt bulb in hand. It’s not that I can’t, it’s that I don’t really need to.

And that’s the point.

Maybe we just need to give the guys a chance to fail before they can succeed. Let them be the ones caught without a clean diaper in the park when three days of constipation come to an abrupt and malodorous end. Let them be the ones with 8 ounces of formula soaking through their brand new Ken Follett hardcover because they didn’t bother to snap the lid on the bottle before sticking it in their backpack.

Let them be the ones who get stuck with a squirmy, excrement-coated 11 month old on the changing table with only a stale, dried-out wipe at the ready.

{Comments Off on The Daddy Duhs}