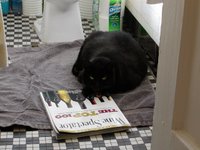 Yesterday I was spending some quantity time in my favorite room, the bathroom, when I glanced over to see the fat, evil cat poking her head out of the bathtub with that guilty look that says either, I’m drinking out of the faucet or I just puked all over your sheets again but you’ll have to get into bed in the dark and lie on it to find out where.

But for a brief moment her faced looked…well, nice. Oddly devoid of intent to do harm. Like a sooooo bershon teenager who suddenly reverts to your sweet little girl again when no one else is looking. And at once I was taken back to the early days of life with Desdemona, way back before Nate and I would lie around in bed wishing only half-jokingly that maybe if she really loved me, she’d kick it soon.

(Don’t judge me too harshly, animal lovers. I will reiterate that this is a cat that inspires little compassion. I swear, PETA has a subdivision called PETA-EDWSU, People for the Ethical Treatment of Animals Except Desi Who Scares Us.)

1991. In the wake of the first post-college (and post-college boyfriend) breakup, I took Desi home to fill the void. She was a feisty little thing from the get-go, but loyal like nothing else. She followed me from room to room, even somehow managing to perch herself up on the narrow sliding glass door over the tub every time I showered. She nestled behind my neck in bed at nigh, suckling and keeping me awake with the lusty purring–something I only half-minded. I had more than my share of free weekends to compensate for the lost sleep back in those days.

Desi watched the first episodes of Seinfeld with me, chewed on ticket stubs from a matinee of Ghost, and heard me sob as I watched scud missiles fly through the air, painfully aware of witnessing real war for the first time in my lifetime. She saw my hair color change. Often. She mauled my first real piece of furniture. She hid in the bathroom while party guests crammed into my studio apartment, drank gallons of punch, and swayed woozily to mixed tapes belting out Lloyd Code and The Divynyls.

She watched me eat a lot of ramen noodles.

She moved with me out of state then back again. She cuddled with me as I collapsed with exhaustion from jobs that demanded my soul and my holiday weekends, all while my business cards were reprinted with increasingly longer titles. She saw my CD collection slowly outgrow the 6-inch gap between the TV and the disc player. She watched posters come down and artwork go up. She made a nest for herself on the closet floor among shoes that evolved from sales rack pleather to $300 kitten-heeled mules.

But what struck me most as I sat in the bathroom for the 18th time or so that hour is that Desi was there for the endless parade of ill-considered boyfriends, BFsF whose names I no longer recall, co-workers turned friends, hit-and-run suitors whose faces became blurry the morning after the drunken make-out session, and men who insisted “I’m just not ready to commit” when really they meant, “I’m just not ready to commit to you.”

She saw me go from the me I was to the me I’ve become.

And that’s when she met the man who didn’t get away.

Soon came the dog. And the move. An office that became a nursery, and a baby that grew into a fur-grabbing, tail-pulling, aggressively cat-petting bundle of affection. Life as Desi knew it–as we knew it–was now something else entirely.

This crazed little black beast has been the one consistent thing in my life for 16 years, the one being who could tell the stories I’ve forgotten or wish I could. How could I even consider begging friends to keep her when we move later this summer? So what if she would eat them whole if given the chance; she was my companion for all these years and deserved better from me.

And just as my heart was swelling for this fat black furball and our decade and-a-half together, I walked back to the bedroom.

Where she had crapped all over the bed.