A brief note about Monday’s comments (the kindness of which rendered me temporarily paralyzed): I’ve never been told in my life that I have good hair. In fact I spent my formative years doing an uncanny Magenta impression from Rocky Horror. That comment alone was worth the agony of deciding whether to post a photo. Thank you for that.

I have made it to LA. I can almost feel my lips swelling with collagen-injected empathy as we speak.

What you don’t know is that I arrived here by way of Orlando, destination of choice for middle-aged couples in matching lavender plaid Bermuda shorts. (Note: If you are wearing a t-shirt that says chick magnet, you are decidedly not.)

Here’s how my extendatrip began:

Outside Delta Song gate 24, Charlie Brown’s teacher came over the PA to announce wah wah wah WAH wah wah WAHWAH all seats may now board. And so I got on line. I was eager to get comfortable, score a pillow, settle in for a few brutal rounds of in-flight trivia against the other passengers (gotta love those TV screens at your seat). However when I reached the the front of the line, I was told that all seats were not boarding and I should step aside, ma’am, until we call your group number, which is nine. And so I stepped aside and waited.

No one left in the entire terminal except me.

I approached the front again, asking politely whether I might get on the plane. The troll-like ticket agent craned what she had of a neck from side to side, scanning the waiting area. Then in one of those you-can’t-make-this-stuff-up moments, looked me right in the eyes and belted into her microphone, “NOW BOARDING GROUP NINE. GROUP NINE, YOU’RE FREE TO BOARD.”

Group nine–me–stepped up to the gate. “Group nine?” she asked sweetly like she had never seen me before. Then she waved me through.

And oh, I did get off that plane as trivia champion of Delta Song flight 2008, narrowly edging out CHAD in seat 12E with a lucky 500-pointer about the team occupying Miller Stadium. (Answer: A. Milwaukee Brewers) Do not ever challenge my ability to fill valuable grey matter with useless factoids, CHAD. I will take you down.

My night was spent in the Bates Motel-like accomodations where my client had seen fit to store me for the night. The mattress felt like the stuffing had been removed and replaced with crumpled cardboard. While I was freezing all night, it seemed a better solution than pulling the coverlet over me; who knows what bodily fluids and unknown substances might have been revealed by an eager 20-20 investigative reporter armed with a black light. And I am not sure how it is possible to wake up every half hour hearing someone thumping around on the floor above, when you are STAYING ON THE UPPERMOST FLOOR, but somehow that was the case. I don’t think I’ll be returning any time soon.

The motel was located on scenic International Drive (that’s I-Drive to you, my one Orlando-area reader). Imagine the love child of an illicit tryst between Times Square and the food court of your local mall, and you’ve pretty much got I-Drive. The funniest place there (and that’s saying a lot) is a retail establishment called Bargain World that was built in the shape of a flying saucer. My coworker Mike and I have imagined their low-budget local ads as something like this:

Open on two men dressed like aliens. Green make-up, sparkles on face, bouncy antennas headbands, cheap silver space suits. They speak in a staccato tone, overenunciating each word in the style of the Coneheads.

ALIEN TWO: That means we come from space. To bring you bargains.

ALIENS IN UNISON: Bargain World. The bargains are out of this woooooooorld!

Sadly, on this trip we discovered that the flying saucer had been replaced with a pedestrian, boxy building. We can only assume that the mothership took off into the universe in search of more bargains.

Mike, by the way, is one of the best business travel companions you could ask for. While he kicks ass in a meeting, he’s also the guy who eggs you into having just one more cocktail (which is never just one more), laughs too loud even when sober, and generally insures that I’m having fun instead of staring mournfully at my daughter’s picture on my cell phone. He’s also Irish. Enough said?

Mike is one of those Blackberry addicts, which made for some great Mike laughing too loud moments in the Orlando airport on the way to the other coast, particularly as his Blackberry began to show signs of demise. 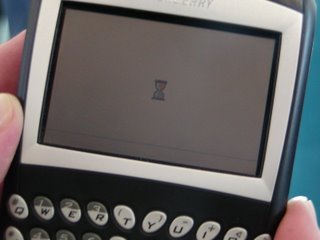 Oh no! The spinning hourglass of doom. And what’s that line? Has it flatlined for good? 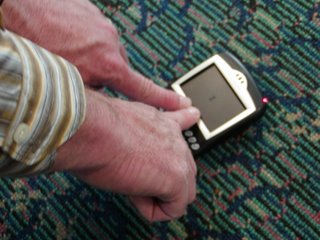 20 minutes without the Blackberry. Mike starts to get the shakes.
Drastic measures are called for and compressions begin. 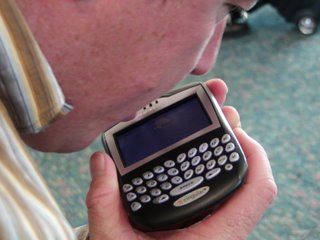 The situation deteriorates further. Mouth to PDA resuscitation begins.
The old lady reading Danielle Steele across from us is not amused. 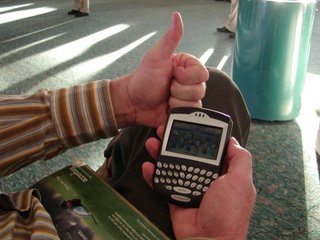 Our efforts were not for naught. The patient lives!
Time for a cocktail.

As you might be able to tell, were just a little punchy. Five hours of very interrupted sleep followed by seven straight hours of client meetings in a windowless conference room will do that to you. 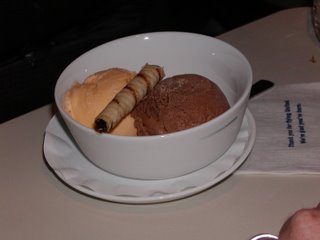 We should never be allowed to upgrade to first class.