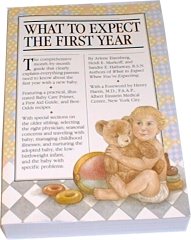 Those baby books are crap. Each and every one of them. They don’t prepare you at all and I want to know who I can sue.

Yes, they tell you about burping techniques and diaper rash prevention and the thirty-two patented breastfeeding holds, but they don’t even come close to preparing you for the real issues that parents face. Issues like working so late every night that you come home when your baby has already been in bed two hours, then wanting to kiss her but knowing you will wake her up and then you’ll get yelled at.

Issues like waking your baby up but not having the time to lie in bed with her to get her back to sleep because you still have more work to do.

Issues like leaving her in the hands of the most committed and loving stay-at-home dad in the world but still feeling neglectful for not being there yourself.

Issues like admitting you can’t do it all, which means by definition that something gets left in the dust– your relationship, your child, your work or yourself.

Issues like packing for a two-and-a-half week business trip to LA when you haven’t even unpacked from the last one.

Issues like knowing you will have six whole days before your baby joins you on your trip, and that means six days of the first tooth popping through the gum. Six days of the bald head becoming ever so slightly less bald. Six days of missing “cat” and “ha” and “aieeeeeeyiyiyiyi”–and God forbid “dog” which seems to be in the works. Six days of not even having the possibility of kissing her goodnight late at night if you wanted to, even though you wouldn’t because it will wake her up and then you’ll get yelled at.

Issues like calling your issues “issues” in order to avoid acknowledging that what they really are, are problems. Big, fat, guilt-inducing, sucky ass, no-book-said-anything-about-this problems.

Issues/problems like not even wanting to vent about your issues/problems because it’s not like you’re the first working mom to ever go through this in history, ya know.

That is what to expect the first year.

3 thoughts on “I did not expect this.”