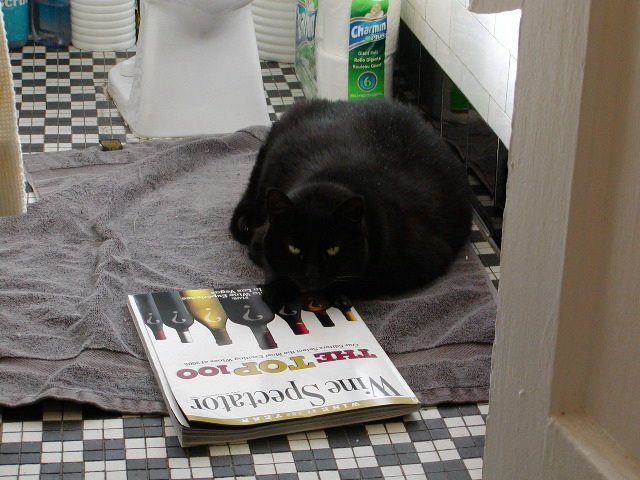 I am not in love with my cat. That’s no surprise to readers of this blog–or to those who have actually met her and, against all odds, lived to tell the tale.

I am biding time, waiting for Desdemona to cross that ninth feline life off her list and come back in the tenth as a cockroach. Or a Republican. Or whatever it is that one earns by sucking for the better part of 16 years.

Once, I adored her. Those were the days that she curled up in the crook of my neck at night and licked behind my ears, purring so loudly that I had to shoo her off the bed to get some sleep. The days that she was shitty to me only part of the time, even if she was shitty to everyone else in the world all of the time. Still, I was happy for whatever affection she doled out, especially when it was just Desi and I; the cliche twosome of single woman and single cat. So, she bit the occasional visiting relative or one-night stand–what can ya do.

And then Nate came. And Desi sank greatly in importance. 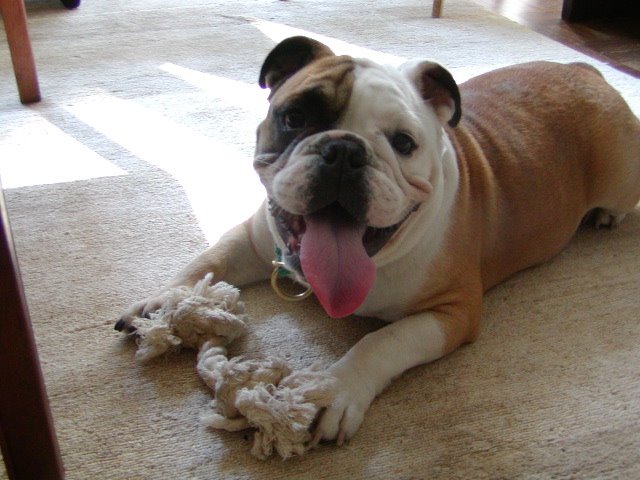 Soon after, the dog came.

And in very little time, I loved the dog more.

I know, I am terrible for saying as much. But Emily didn’t hiss at all my friends, she didn’t puke on the bedspread, and she was far more likely to play with a ball of string and far less likely to eat my visitors whole.

We could do things with the dog. Take her for drives in the country. Sit at sidewalk cafes slugging coffee while she panted at our feet. Walk her around our West Village block and determine which local celebrities were nice based on who took the time to pet her when she crossed in their paths and demanded it. (Answer: Steven Colbert yes, Maggie Gyllenahaal no. Amy Sedaris yes, Paul Rudd no.)

Desi was a pet but Emily became family.

She was my laptop screen saver and the home picture on my cell phone. Enough said.

Suddenly I understood what all those so-called dog people saw in their pets. Why they included them in their Christmas card photos. Why those with otherwise impeccable taste walked around with T-shirts and key rings proclaiming I [HEART] MY COCKAPOO-LABRADOODLE MIXED BREED.

(At this point I must be clear that while I did understand these things, I did not do any of them myself. The closest I came was emailing puppy photos of Emily to the relatives. In fact, if Nate called me “mommy” with her it made me squirm, with the image of Parker Posey’s character in Best in Show in mind.

Come to think of it, when my dad and stepmother got a dog– their “baby”–and then tried to figure out what my relation was to it, I had to cry uncle on the bizarre bi-species family stuff. I think they called me his sister–making my daughter the dog’s niece? Um…no. I’ll be having none of that.)

I loved Emily not just because she was Emily, but because she made me see that I was indeed capable of taking care of something without killing it. She no doubt paved the way for Thalia, and for that I will always be indebted to her.

But once Thalia arrived, to whatever degree Emily had been our baby, she wasn’t anymore.

I just don’t feel it.

Am I horrible? Am I alone here? Please don’t tell me I’m the only one in the world.

Emily is still loved, to be sure. Especially by Nate, who amazes me in his ability to remember that the dog needs a cuddle or a treat or a belly rub or a bath, even when there are a million other things going on in our lives. The dog accompanies us on long trips, or weekend stays at my mother’s house. She sleeps on the bed with us, and she gets the expensive dog food. To say nothing of the table scraps that fall around the high chair, making her better fed than Thalia most days.

She is not a neglected pet in the least. But she does not occupy the same place in my heart that she did two years ago.

I’m so sorry Emily: I adore you, if not your flatulence.

But we have two children. And you’re not one of them.